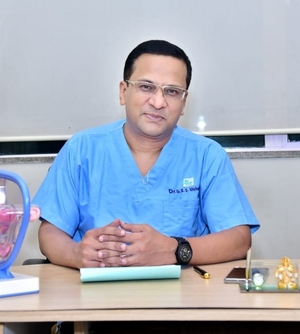 Dr G S S Mohapatra is currently working as SENIOR CONSULTANT AT APOLLO HOSPITAL, bhubaneswar. He worked previously as the HOD & Senior Consultant at Amri Hospital, bhubaneswar. He received MEDICAL EXCELLENCE AWARD in the field of GYNAEC LAPAROSCOPY AND INFERTILITY, from the hands of Shri Naba kishore das, HONOURABLE MINISTER OF HEALTH AND FAMILY WELFARE, Odisha on 28.07.2019 Dr G S S Mohapatra is a senior obstetrician and a gynaecological endoscopic surgeon par excellence.With more than 20 years of expertise in the field of obstetrics and gynaecology , he is a familiar name to the people of Bhubaneswar, rest of Odisha, West Bengal, Jharkhand, Chhatisgarh and even adjacent countries like Bangladesh. Everyday,there are numerous people who flock to him with their ailments and they are provided relief with utmost care. Having graduated from Calcutta National Medical College, Kolkata University, Dr Mohapatra went on to do his postgraduation in Obstetrics and gynaecology. He then did his further training in basic followed by advanced laparoscopy at World Laparoscopy Hospital, New Delhi and Gujarat under the able guidance of Dr R K Mishra and Dr Mehul Sukhadiya respectively.He also worked as Associate Professor at Hitech Medical College, Bhubaneswar imparting knowledge and training to many students in his field. Dr. GSS Mohapatra then went to International School of Surgical Anatomy (ISSA) at Verona, ITALY under the guidance of Dr. Marcello Ceccaroni and Dr. S. Puntambekar for his Master's Course in Advanced Laparoscopy in the month of July, 2019.Dr. GSS Mohapatra was awarded the TIMES HEALTH ICONS AWARD by HIS EXCELLENCY, THE GOVERNOR OF ODISHA on 29.07.2018 for his pathbreaking work in the field of gynaec laparoscopy and infertility. Dr G S S Mohapatra was awarded as THE BEST GYNAECOLOGIST & LAPAROSCOPIC SURGEON IN EASTERN INDIA by Primetime Media at the GLOBAL HEALTHCARE EXCELLENCE AWARDS held on Sept 23rd , 2017 by esteemed dignitaries like SRI GVL NARSIMHA RAO,SRI AMAR SINGH,SRI CHETAN CHOUHAN AND PADMA SHREE AWARDEE DR J K SINGH. He completed his training in Minimal Access Surgery at IRCAD, University of Strasbourg, FRANCE and Tubingen, Germany under Dr Arnold Wattiez, the world renowned Giant of laparoscopy and Endometriosis. He did his Fellowship in Advanced Laparoscopic and Robotic Surgical Oncology under the able supervision of Dr Robert Zurawin, AAGL,USA and India's first uterine transplant surgeon Dr Sailesh Puntambekar. He received the prestigious ODIA R GOURAV SAMMAN in the year 2010 in the field of Medicine for removing a 15 kg ovarian tumour ( Episode :Mu banchiba ku chahen).This was shown on OTV and flashed in all leading newspapers.He is currently working as SENIOR CONSULTANT, GYANEC.ENDOSCOPIC SURGEON AND INFERTILITY SPECIALIST at APOLLO HOSPITALS, BHUBANESWAR imparting healthcare to all sections of the society with a lot of hard work, dedication, perseverance, adding smiles to the lives of so many patients with a constant endeavour for self improvement.